Every culture has urban legends. They're usually funny or even a little bit sexy as late 90's Joshua Jackson taught us. Krazy Korea has a lot of urban legends and they tend to describe them without a hint of irony. Part of me wants to ask if they know it's not true, but the other part of me doesn't want to ruin Christmas.

The most prominent belief that kimchi is a miracle cure-all disease fighter extraordinaire. Got a cold? Kimchi. Don't want to get swine flu? Kimchi. Got a nasty case of the aids? Kiiimchiii. Some people are even hesitant to go abroad because they are concerned about what might happen if they don't have enough kimchi.

Another food related legend has to do with seaweed soup we were eating for lunch this week. My teacher told me that you can't eat it before exam or you might fail. Why? Because it's slippery. Right, right, slippery. Like your knowledge will slip out of your head? Or like the seaweed might slip out of you in the exam and you'll have to run to the bathroom? I think this is a case for Mythbusters. Those guys seem pretty desperate for work.

Next up: Fan Death. No, not fans dieing from the excitement of seeing their favorite K-pop celebrities but, in fact, death by fan while you're sleeping (also a Canadian indie band, check it). Being the inquisitive sort I probed deeper: what exactly is the cause of death? Answer: the fan. Ahhh, so clear now. For more information I turned to the only news source I trust, wikipedia. My friends at wiki tell me that possibly explanations are that the fan sucks the air away from your face causing you to suffocate or possibly that it chops up all the oxygen molecules in the air, rendering it useless for respiration. I prefer the more colourful idea that the blades escape the metal enclosure and physically chop you up to bits. 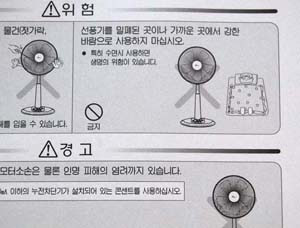 Now urban legends are fine but fan death goes too far. The Korea Herald newspaper reported at least 10 deaths in one week from fan death and the Korean Consumer Protection Board issued an official warning about the dangers of fans. Gord Giesbrecht from the University of Manitoba suggests otherwise: "It's hard to imagine death by fan, because to die of hypothermia, one's body temperature would have to get down to 28 [°C], drop by 10 degrees [Celsius] overnight. We've got people lying in snowbanks overnight here in Winnipeg and they survive."

Finally, it's not really an urban legend but supposedly Koreans don't have sex before marriage. Sure, sure, just like Palin's daughter. This week my 30-something co-teacher came to work with hickeys on her neck. Okay, memory lane time, when was the last time you had a hickey? Junior high? High school? You probably figured it out pretty quickly and shut down the vacuum cleaner asap. You might not have known it then, but the benefit of your youthful exploits was that you figured it out and didn't have to put a bandaid on your neck at lunchtime after your scarf kept falling down at work. Coincidentally prostitution statistics report that 1 in 5 korean men pay for sex more than 4 times a month. Shiiiiit son. To put that in perspective I take out the garbage about once a week, if I remember. 1 out of every 5 men goes to hookers more often than I take out the garbage. I hope those guys grab the recycling on their way out.

Okay, enough ragging on Korea, I've got some pop rocks and pepsi to drink.
Posted by bisforcookie at 12:52 AM